I had completely forgotten that I’d ordered them when I went to the mailbox and retrieved the padded envelope.  Tearing it open and tipping out the small  transparent plastic container I was still in the dark; when I turned it over and found a few pieces of popcorn covered in specks I finally remembered. I burst out laughing at the absurdity of it, my ladybird larvae had arrived.  With three spaniels, one a curious pup, I resist any chemical use on my garden, but my rosebuds were being massacred by aphids. It felt more than a little weird to order 50 coccinelle larvae online. But enough reading had assured me that  this box of wrigglers was the charge that was going to save my roses from a ravaging! I was full of enthusiasm and more than a little excited at the idea of watching the project  play out.

The kind of spiky little crew flitted about on their temporary food and I used the supplied brush to carefully move them one by one to insect riddled rose branches. The aphids in their throng had quite nearly added an entirely new coat of green to the unopened buds there were so many! But I was optimistic, for I had read that a ladybird could eat a hundred aphids a day! Well my garden was some kind of all you could eat paradise. Everyone deposited in the garden,  I wished them a bon appetit. 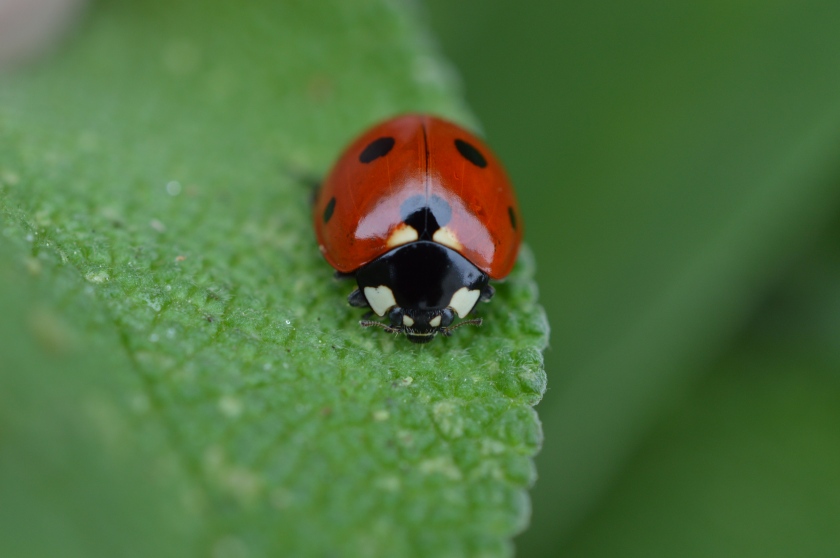 A few weeks later, I found them. A huge amount of ladybirds plus even more larvae growing and all of them in the only part of the garden where there aren’t roses.  So pretty and cute in their domed red coats,   I couldn’t be that angry that they had gone AWOL.  They had clustered in two areas of my back garden, very close together. Quite a few I found bobbing about in my swimming pool. The others formed a crowd on a monstrous sage plant just behind the pool, each taking for him or herself and individual leaf like a sun lounger. It was beggar’s belief! What was going on?

I never saw a single aphid being eaten. I spent an embarrassing amount of time watching and waiting.  Nor have I seen a single coccinelle (ladybird) in the front garden since, with the exception of the few I have coaxed up to a rose bush via my hand.

That was last year and yesterday when cleaning the swimming pool I found another one bobbing back and forth on the tip of the thermometer. I fished it out and put it to dry on a nice pale green, soft rabbit eared sun bed they seemed to like so much. I peered a little closer  to the sage and remarked the same familiar form of spiky, spotty larvae  crouching here and there on the plant. “So here we go again,” I thought quite dismayed.

I had spent a lot of last spring bitching about ladybirds. I mean, I read that sentence back to myself now and I have difficulty to believe I wrote it. They lounged by my pool or in it. “The gall!” I had  fumed and then found myself suppressing laughter. This morning, exasperated and  perplexed all over again, I googled for clues as to what on earth was going on. I mean,  am I running some kind of ladybird welfare state? As much as I love their form and shiny little shell, why weren’t they where the food is in plentiful supply?

I discovered that the place the ladybird is happiest in the garden (apart from poolside at my place) is upon absinthe plants! The plant from which the famous ‘green fairy’ potent alcohol  is made, full of thujone which is famous for mind bending effects!   So popular amongst the bohemians, intellectuals and artists of the french belle epoque, it was considered a wild hallucinant and banned for one hundred years in France! 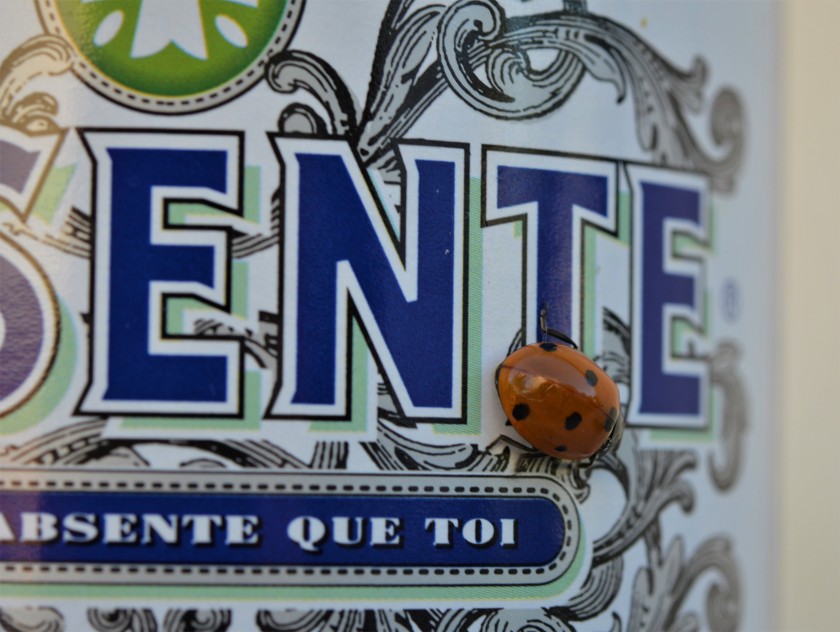 Oh great, so now not only are my ladybirds layabouts, but they also like to frequent illicit hangouts? I mean, they were going downhill fast in my estimation!  All to prevent the use of a few chemicals, I was being taken for a ride! Perhaps I need to start spraying my rose bushes with absinthe, I might have more success! 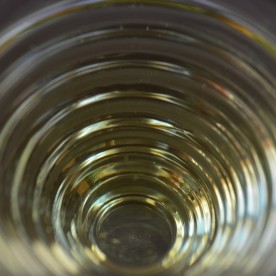 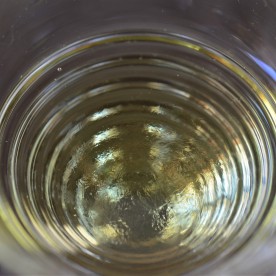 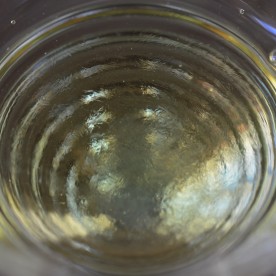 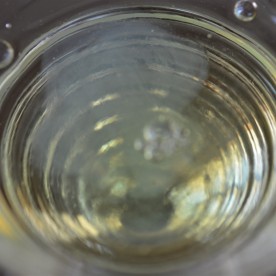 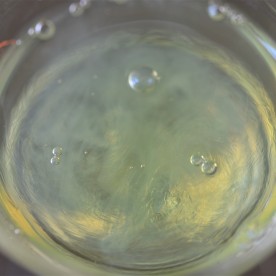 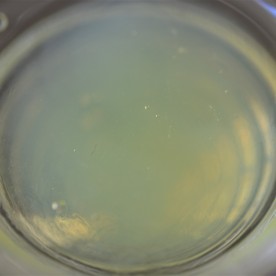 Astonished by the discovery, I read further and calmed somewhat.  The reason ladybirds enjoy the absinthe plant so much is because it is the preferred haunt of the black aphid, their absolute favourite food! Not the green!  I was miffed. I had specifically purchased European ladybirds, who were supposed to eat aphids off roses! But these ones seem a little bit too European!  I went outside and looked again. The larvae all ready to form pupae –  to go off and lounge about for another week or so, to my frustration!  That was when I saw them. The poppy seed like clusters of tiny dark insects on the stems of some of the sage. My ladybirds didn’t need to find black aphids on some kind of plant version of the bar du coin, local bar, their favourite snack was already there on another aromatic plant, my sage, in copious supply.

After jumping to conclusions about them being of poor work ethic, the ladybirds must have been doing a decent job as my sage was fabulous last year and now they are gearing up (and breeding up) for another springtime feast. The vendor didn’t specify the depth to which my ladybirds were European and so utterly french at that,  preferring their  pucerons aromatisé!*   “Perhaps they are artists” I exclaim to my husband who confirms “of course, how else would you explain the way they dress”. I can overlook it simply as a cultural misunderstanding; however, that doesn’t really explain why they are spending so much time hanging about in my pool. 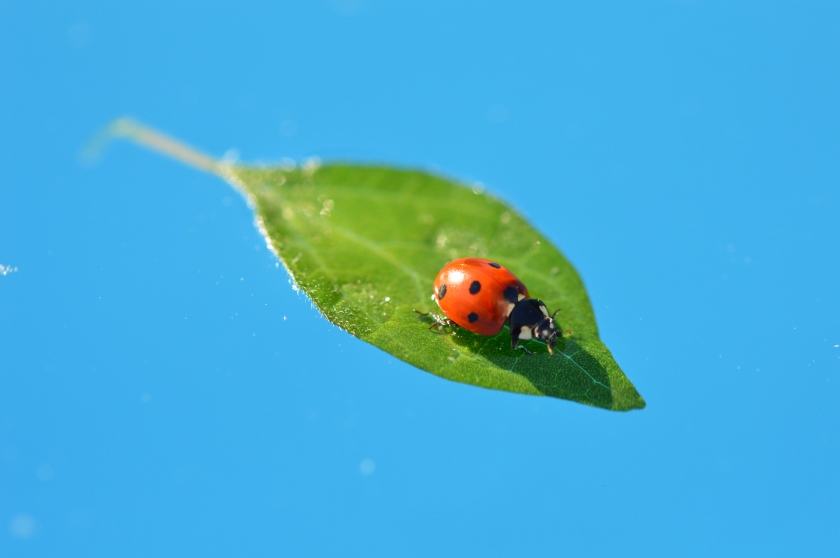