Chasing slippery egg through flour and damming it up before it escaped. A dust of gritty nutmeg  sullies the strong white flour, a good sized pinch of salt scatters across the deep dark richness of ground sarrasin. Kneaded together forms a shade of pale, speckled grey. A melding of contrasts to form the smoothest, most generous dough.

At the wistful end of a lovely Savoie holiday, a brocante, bric a brac market,  was being held on the Saturday of our departure. Determined to squeeze out that last moment of vacation bliss before heading home, I found myself visiting one of the most memorable vintage markets I have encountered. Many villages and towns have tasteful homeware souvenirs; earthenware pots and plates all cutely painted with hearts and snow flakes, and fluffy blankets with mountain motifs can be found in many a store.  But this brocante, advertising posters catching my eye all week, well this was really something unique. Such delight in finding hand carved antique butter moulds and  wooden bread stamps that were used to identify the loaf of the maker in the communal oven.  It felt as though this visit, the timing of our stay to correspond with this market, were somehow a gift that fell into my lap. I paused over perfectly preserved hundred year old children’s ski boots of both adorable size and style, yet quite horrifying rigidity. I saw wooden luges that corresponded in era to those tragic boots and they seemed equally uncomfortable but probably terrific fun.

I stepped up to a book stall and admired  a solid old tome, a  cookery book of black and white photos showing the most breathtaking images of not only rural scenes and village life but also portraits from marriages, mothers with children .  It was written by an elderly lady, Marie Therese Herman and is called, La Cuisine paysanne de savoie, la vie des fermes et des chalets racontée par une enfant du pays – The peasant cuisine of Savoie, the life of farms and chalets told by a child of the region. The photos are so evocative, they could nudge at the heart of any reader and the recipe quantity and detail is astonishing.   I considered buying it but hesitated because I thought that perhaps it would be delving a little too deeply into the culture of Savoie to the visitor.  Appreciating the book too, the seller confirmed that it was really something any Savoyard could learn a great deal from. 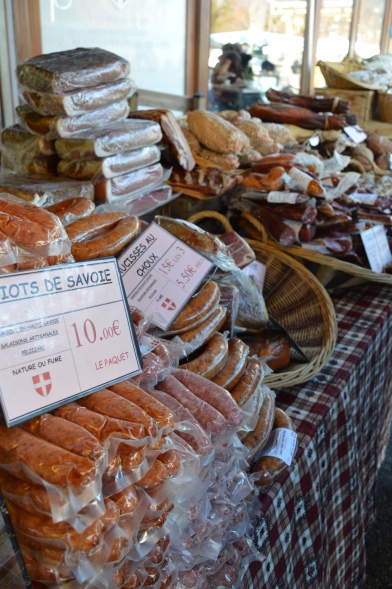 As lovely as it was, I was not entirely convinced I would have the use for such a book. Coupled with a price label as steep as the rock face outside, I put it down.  I left the display and decided to stroll through the vibrant Saturday morning market on that  cold yet bright blue day.  Taking photos of a splendidly curious kid goat, I was still thinking about the book as we walked to the car to drive home. Buckled up in the car I turned to my husband and said, “If i don’t get it I will really regret it”. He immediately jumped out of his seat and headed back to the hall.  With a smidge of a discount shaved from the price, my husband cheerfully handed it to me. Getting comfortable for the drive with my beautiful dogs at my feet, on that sun flooded morning I settled in for a read on the way home.

Marie Therese Hermann, the author of this incredibly detailed book,  has passionately gathered together a rich cluster of recipes. Whether as the recipe of the village of X, or  the version of madame Y, there is a huge quantity of dishes that I want to try and share.  From the warm, comfortable spot where I read in my far too modern and convenient world,  there is a slight danger reading such a beautiful book through a romantic, pure filter! In imagining the peasants who worked so hard to sustain themselves in such a harsh but beautiful alpine climate, there is an appreciation and respect for food that I wish to see in our life today. The labour involved appears so stunning, I wonder about my husband exchanging his office for leading a cattle pulling a cart laden with hay in the snow!  When I read the anecdotes I feel that life must have been such a misery! But then I read the recipes themselves and I such taste and enjoyment in such good food! The book reads in such a way that makes me just long to be holed up in an old farm kitchen with a foot  of snow inching its way up the side of the house, take an old table, rudimentary tools and start about making recipes from scratch!

That was several weeks ago and here I am in my own kitchen this morning. Looking up from Herman’s book, I glance outside not at a frigid sleeping garden, but at a mass of irises and rose buds vying for space in the spring sun. A few weeks of gentle warmth have coaxed the roses to wake and bud but yesterday a surprising snap of cold arrived. Today  a strong wind blows and even though the sky remains beautifully bright, the cold has seeped through the house and makes me want to light the fire. Oh why not? My husband would think me quite mad! But oh, he is at work so lets go…. As this is probably  one of our last chances for this sort of weather  for a while, I decided it is time to make Crozet! 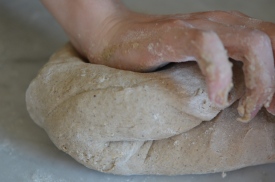 A speciality of the mountainous region of the high Tarentaise valley in Savoie, crozet is a type of pasta that has become one of the most famous foods emanating from the entire region. Being so close to Italy’s region of piedmont, there have been many foodstuffs that have travelled across the alps to influence the flavours of France, like polenta and ideas for pasta. Crozet is found in any restaurant of the area and also in foodstores; sold in boxes and bags, comfortably uniform and very nice to eat, but a more rustic form made at home is delicious.  It is  made with both white and  buckwheat flour, and is described by Marie Theresa as petit cubes grisatres, which sounds so much more romantic when said in french, than ‘little greyish cubes’!  Buckwheat flour is rich in protein, iron, amino acids and fibre, who wouldn’t want to enrich the pasta in their diet in such a way? I read the author’s comment that high altitude communities with difficult growing conditions, considered polenta, rice and crozet to be a little like vegetables! I am sure there are a lot of people who would like to do similar!

The women of Savoie managed to be as creative  as they could with the little they had available; it was a diet that relied heavily upon potatoes, bread and grains,  less often meats, with dried ham being the more common.  Cheese and butter were part of the diet that were eaten sparingly and considered a luxury in reality as opposed to the myth of fondue savoyard being a very frequently eaten dish. Cheeses of Savoie are indeed distinctive and some of my most favourite of all; they merit their own  attention in a separate article. In the case of crozet – some flour, a couple of eggs from their own chickens, water, spice and salt created this terrific pasta. A little cheese and butter from the dairy, an onion, and voila, a delicious meal. Making crozet necessitates  a little time here and there over the course of a day – I start out the morning to make the pasta, roll it, cut it and then leave it to dry for several hours. By the late afternoon (after several rather proud glances during the day at my handiwork) I spend about 10 minutes flicking row upon row of little grey squares off the marble slab of my workstation.

The most traditional way to prepare crozet is simply to boil them in salted water, drain, sprinkle with grated gruyere cheese and then dress with onions that have been sautéed in melted butter until golden. Or more simply, drained and tossed with melting butter.  It is true that amidst the tourist flurry of savoie during the ski season, they are sold often teamed with either smoked or unsmoked   ‘diot’ pork sausages.  Or served mixed with slivers of raw ham, then in the ‘gratin’ style -topped with gruyere cheese and browned to golden and bubbling in the oven. Alternately they can be mixed with creme fraiche and sprinkled with cheese for browning once again. Today when visiting Savoie there is a tendency to see an excessively cheesy, sausage, bacon or dried ham and fried potato diet going hand in hand with days of downhill skiing.  This is modern tourist Savoie diet that bears little resemblance to the style of life discussed in Marie Therese’s book . Whilst each of these ingredients is of a very high quality, in my opinion they are best appreciated when served in a starring role separate from each other – with a much more sedate accompaniment..

Here is Marie Therese’s recipe with a few tweakings of my own:

water as needed to make a dough

Place both flours, salt and nutmeg on a work surface and make a indentation  in the dry ingredients. Crack two eggs into this space and work the flour and eggs together until you have something that resembles a rather shaggy dough.  Add enough water to make a dough that is pliable but not sticky and knead until it forms a nice smooth ball.

Liberally dust your work surface with flour and begin to roll out the dough, working it in all directions until it is about 2 mm thick. 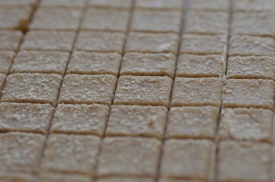 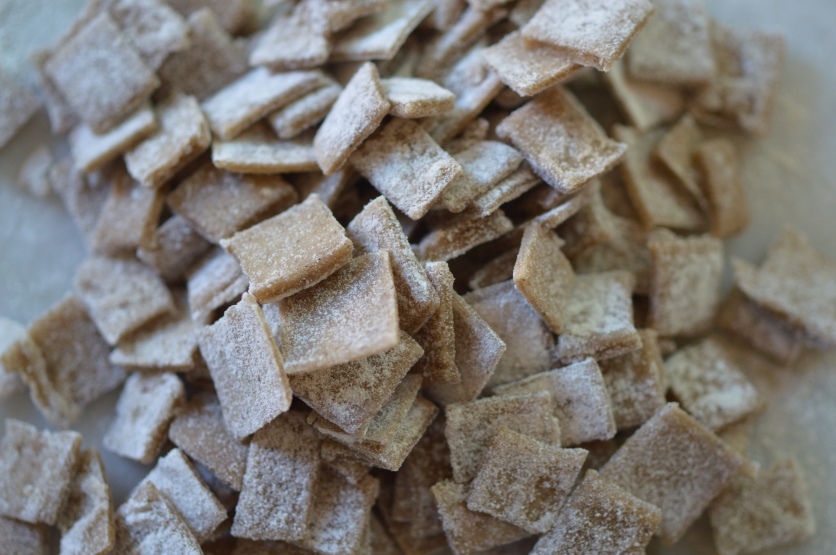 Marie Therese states in her recipe to cut the dough into widish strips then to flour top and bottom, lay them on top of each other and cut thinner strips then cut again to cubes. For some reason, I prefer to cut the crozet entirely horizontally and then vertically, rather than layering them upon each other. It is a rather strange activity but I find it curiously enjoyable. So long as the table surface is reasonably dusted with flour under the entire dough, they should dry nicely and can be picked up easily. Using a colander, I shake off as much of the residual flour as possible.

I put a large saucepan of water on to boil then salt it generously. Adding the crozet, stir them around so they do not fall to the bottom and stick together! 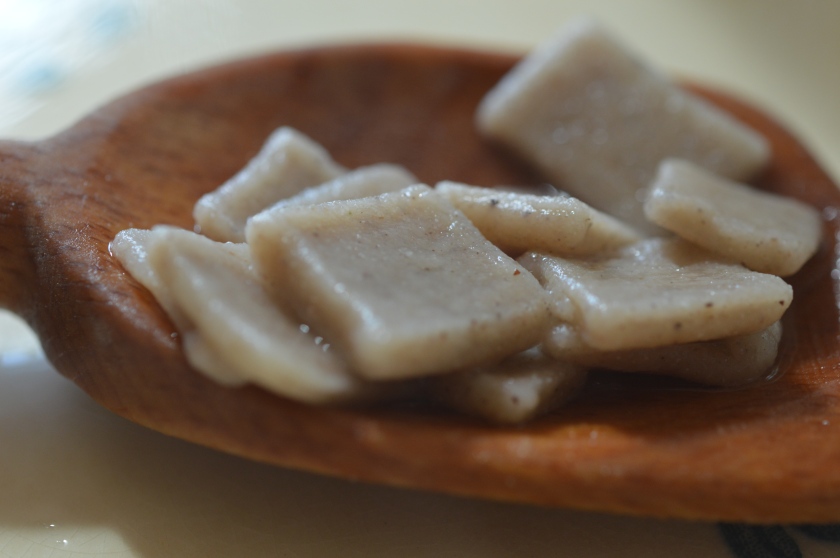 Boil for 20 minutes, they will plump ever so slightly, take a paler shade of grey and have a very satisfying al dente texture.

Important note: If you have too much flour left on the pasta, you may need to boil the kettle and have your strainer at the ready. Too much flour on the pasta can create a gluggy sort of cooking water and that is just nasty! In my early try with the recipe, I allowed the crozet about 5 minutes in the rapidly boiling water, then quickly poured it into the strainer, returned it to my pot, added the boiling water from the kettle and resalted the water. Phew, saved the day…..