I recently found some puzzles that are as they would say here, a croquer, literally ‘to crunch’, so gorgeous I just want to eat them. Giddy and bubbly over these finds, I have to share one before I evaporate entirely. I encountered a man who was clearing out some old family toys from the 1950s and didn’t hesitate to snap them up. I am sure you will be really impressed, I can’t believe my luck…

Looking at the boulangerie – patisserie puzzle, it isn’t difficult to see how education on the subject of food started at a very early age. 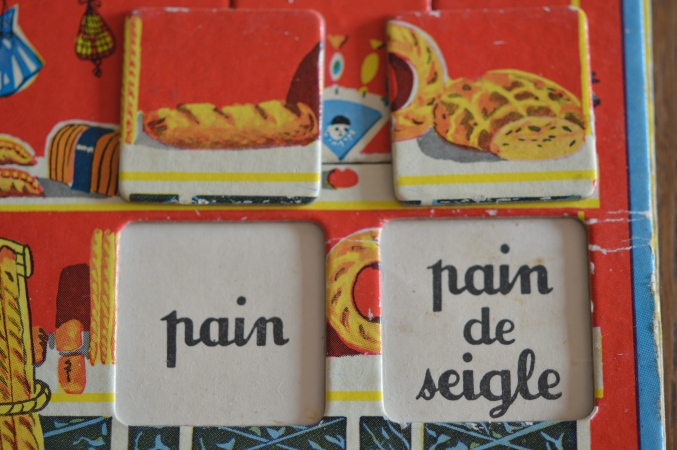 Did little Josiane understand the difference between her ordinary bread and her rye in this picture? 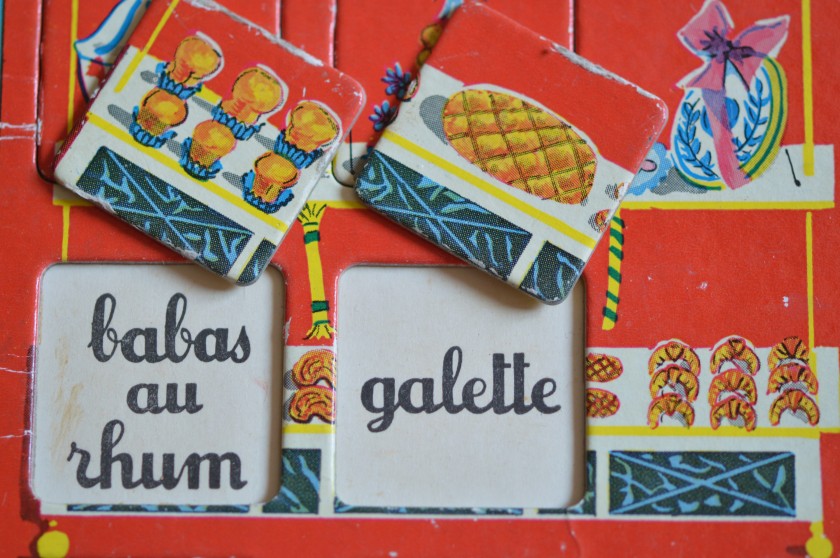 The bulbous, hatted rum babas in their frilly paper cases! There are so many details in these pictures that are relevant to  today’s patisseries.  The cross-hatching on the image of the galette would be instantly recognisable to little children, the treat of the epiphany at the beginning of each year. 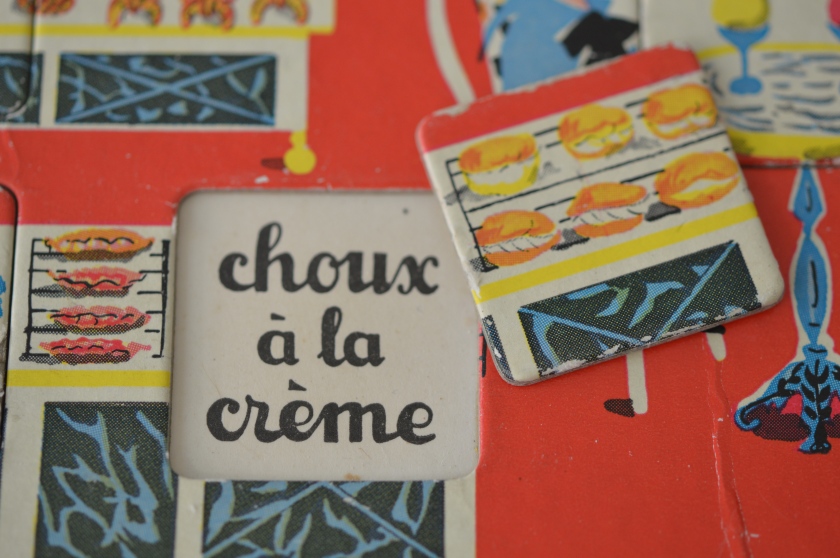 Imagine little Claudine with a side barrette in her hair, looking about for her choux a la creme image. 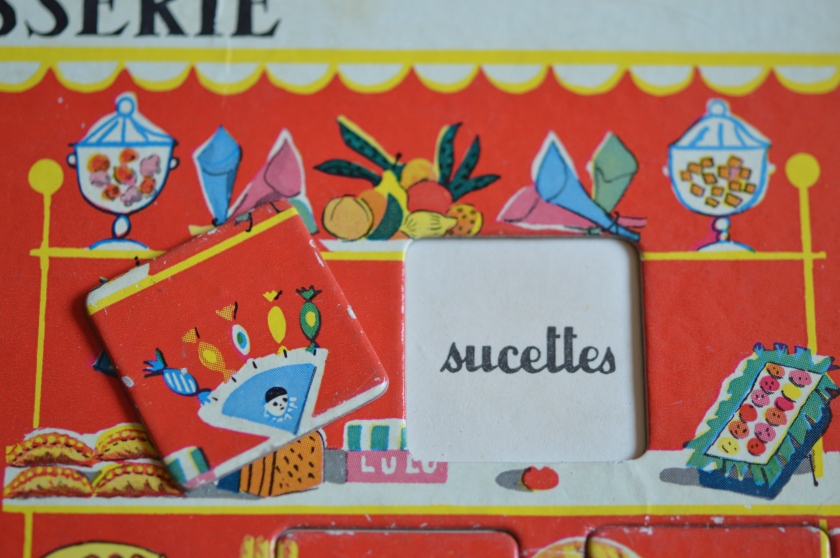 Sometimes today we still see the lollypop presentoir (display) with the peirrot clown in boulangeries and patisseries. The wonderful Pierrot Gourmand, still in existence, the famous french sucette a battonnet, lollypop invention.  Messrs Evrard et Herbet, the owners of Pierrot Gourmand lodged the patent in 1924 of which reads, ‘a machine to fabricate sweets consisting of a mass of cooked sugar in which is embedded the end of a stick’* Elsewhere there are presentation boxes of sweets with frilly papers and cornets of coloured paper, the same as nowadays, full of sweets and little toys.

The box of fruits confits, the candied fruits in their central display, always a beautiful decoration and considered a luxury item then and now.

Bonbons, in a drageoir a presentation glass (or even crystal), with tiny nougat detailed beside. Une Pièce montée, choux pastry tower, is ornamented and becomes a spectacular  display, a cake used for celebrations here, whether it be for marriage, baptisms etc.

So often the patisserie doubles as an ice cream parlour. I love the fact that the children are seated at the wrought iron footed table and coloured rattan chairs,  the typical style of table and chairs that we still see today.

Just for fun, I thought I would look up a list of the most popular given names in France in 1950. The top 50 prenoms, first names of both sexes were listed together. There are plenty that are unisex, which can be challenging to differentiate when heard, but with the addition or subtraction of an ‘e’ when written. Even a few are spelt identically.  I will always remember the experience when my son was in maternelle and for class performance, he was taught the argentine tango by Dominique.  Introduced amidst a large, rather noisy crowd of parents, I walked away later that evening wondering why I had never met my son’s dance teacher…and who was that very friendly man in the jaunty hat, who was full of praise for my son?

Most popular first names in 1950

**Guy in french is pronounced the same as Ghee, which was very hard for me to adapt to!

First names of 1950 sourced from http://www.journaldesfemmes.com/prenoms/classement/prenoms/les-plus-donnes/1950