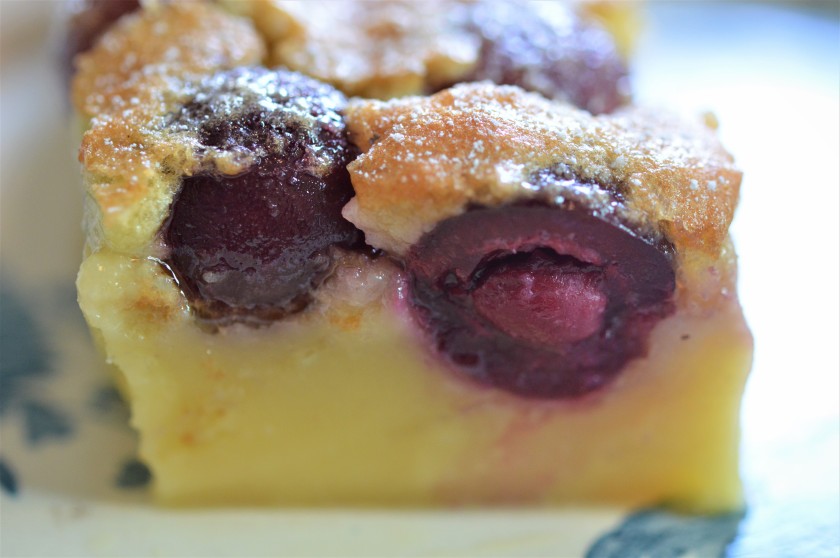 When my husband was very small and their family still lived in an apartment, his mother extended an invitation to an elderly gentleman neighbour to get to know him over a cherry clafoutis. A rich egg, crepe-like batter poured over fresh cherries and baked in the oven until golden; the man was dead the next day. My husband never had clafoutis again in his childhood that he can recall and I have not exactly asked my mother in law for her retired recipe – she does recount the story herself decades later with some amusement however!  I must stress that she does cook both sweet and savoury dishes beautifully and I have remained fine, well and impressed by her precise cookery. In this le temps de cerises (cherry time)  I adore making clafoutis and have tried many recipes over the years.  The recipe below is a mish-mash of a few that I have found and elements of each that I have particularly appreciated. Therefore, that is why I have named my recipe Clafoutis pas comme ma-belle-mere, clafoutis not like my mother-in-law’s.

Last weekend when my daughter had some little copines (girlfriends) to visit, they called out excitedly to me that there were cherries in the garden.   On aphid removal, as we all know I have no reliable staff in the roseraie department, I called out,  “We don’t have cherries in the garden”. “But there are red berries” – I heard as an insistent reply. 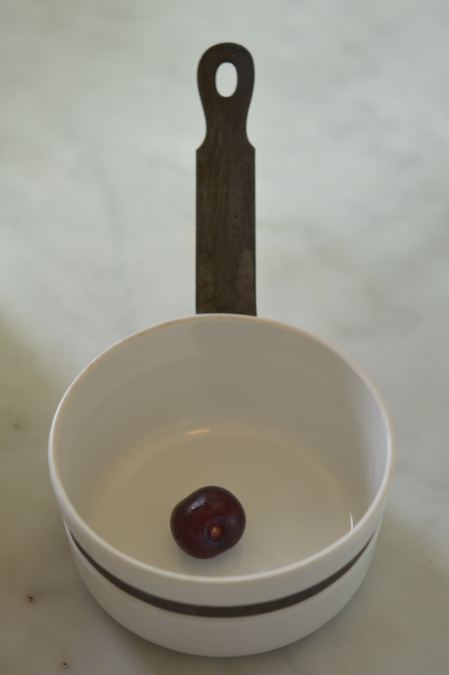 Frustrated and hands covered with squashed green insects, I reiterated that there were no cherries, only a peach tree where they are playing. “But there ARE cherries mum”, called miss Rose-Madeleine and exasperated, I had responded “well don’t eating any red berries you think you’ve found, go show your father and let him test it” (aren’t I just gorgeous?). Soon enough there was a happy gaggle of girls about me, showing me a perfectly ripe red cherry on a stem. “They’re growing there” my daughter pointed at a tree that, ugly, dying and in the way of our plans when we moved in,  we had cut down to a stump. We’d then watched as it indignantly sprouted back and grew strong and healthy in defiance. We changed tack and just ignored it.  Had I known it was a cherry tree, I would have bowed before and done a merry dance around it! 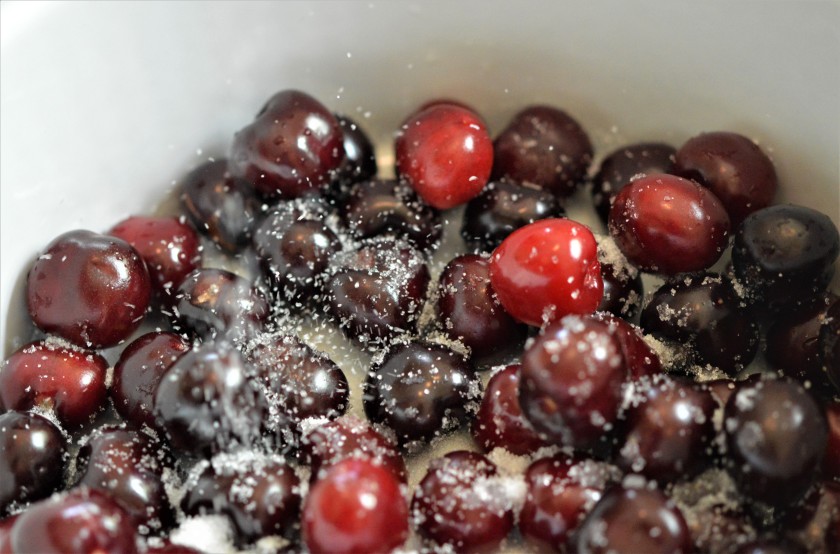 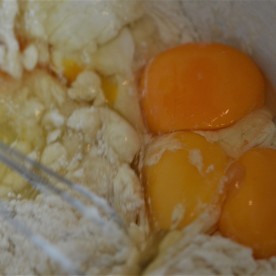 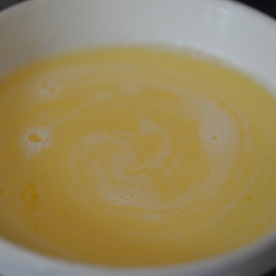 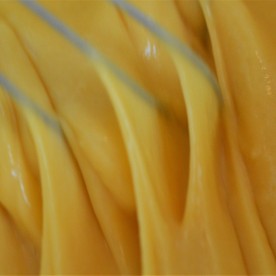 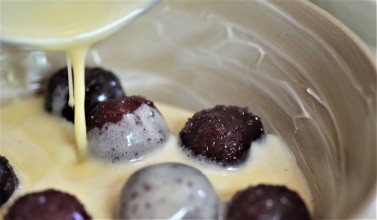 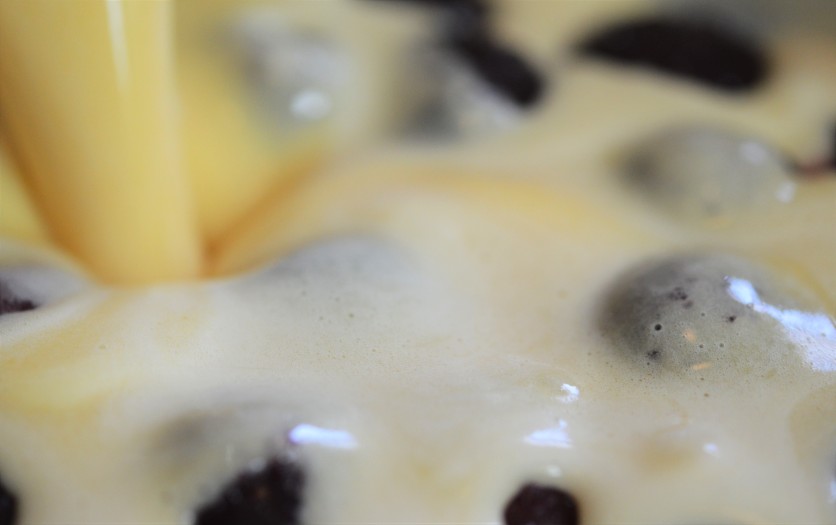 Well that is my punishment then isn’t it? I could have been eating homegrown cherries for two springtimes. I have been buying them in the market and on the home front we had a huge sum of three to share between us. Oh and the isn’t counting the one that is almost ripe! What a feast! Well, I shall have to be patient and continue with market cherries each spring until my own tree is back to high yield. 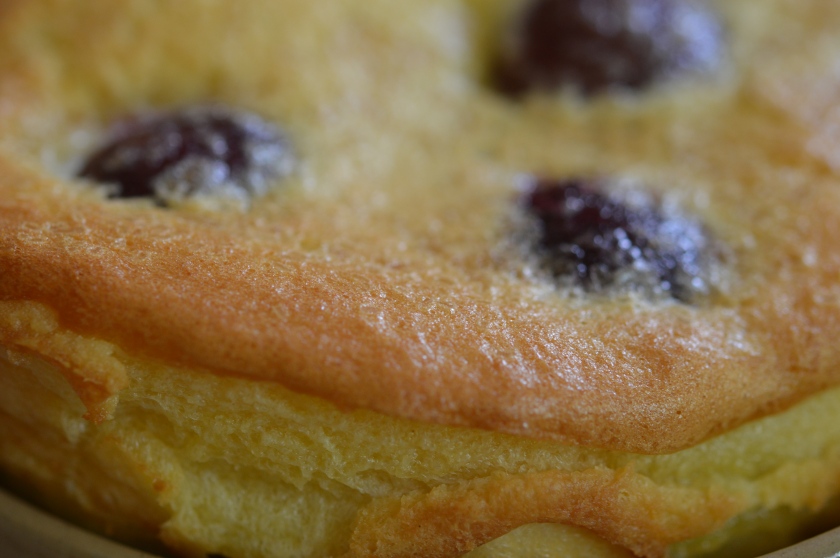 The clafoutis is a dish of the Limousin (yes, cow country), a south central region of France and it is also known in the Auvergne but as a milliard (or millard). Some recipes concede to pitting the cherries before use for the safety of children. This is considered by purists to be highly scandalous as a delicate almond-like flavour is imparted by the stones into the dessert.  Aside from any flavour that may or may not be exuded from the stones, I consider that pitted cherries in clafoutis is just odd. A little like spreading fondue on a slice of bread and making it a sandwich because it might just be more practical. Popping those little stones out as you roll the sweet cherry about your mouth, depositing a small pile of pits on the side of your plate, that’s part of the fun isn’t it? 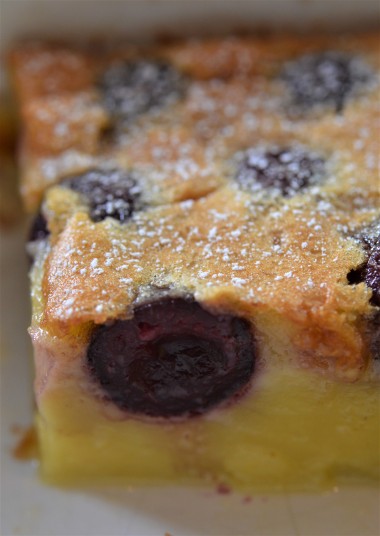 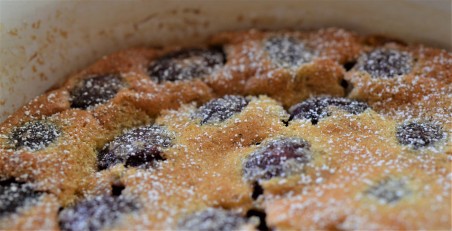 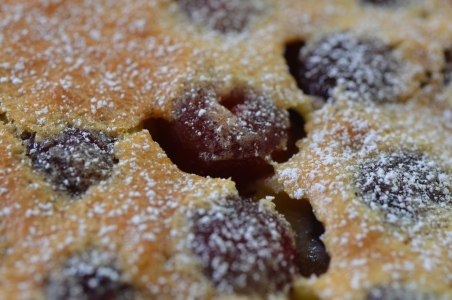 100g butter plus for greasing dish

Rinse cherries, remove stems but do not remove pips. Place in a bowl and sprinkle with 60g of the sugar. Stir well and allow to sit until the fruit start to just bleed a little juice to stain the sugar, you will need to give them an additional stir from time to time but this takes around half to one hour. Preheat the oven to 180°C. Butter well a baking/pudding dish, preferably porcelain.  In a saucepan warm the milk and butter until just below the point of boiling. Remove from heat and set aside.  Mix flour, remaining sugar and salt in a mixing bowl, then add in the eggs, stirring carefully to break up lumps. Pour in the slightly cooled milk and butter mixture, whisking to make a smooth batter. Place sugared cherries on the base of the dish then carefully ladle over the batter. Scatter raw sugar over the surface and bake until golden, between 30 – 45 minutes.

Allow to cool to room temperature, dust with icing sugar and serve in thick rectangles. A smooth, flan-like custard prettily stained with purplish fruit – a really satisfying dessert no matter what time of year.  Whilst clafoutis is traditionally aux cerises, it is possible to use other fruit like pear, apricot or peach.

My saucepans photographed in this recipe are an iconic french vintage style – the bowl made of porcelain and banded with a steel ring which is attached to the handle. They are very fragile but there is something delightful about making desserts using a porcelain saucepan. For making sauces, they ares sublime. The four here are so dinky and cute, the teeny baby one verging on a cup measure! They look a little like a set for a dinette, a child’s tea and kitchen set. I just have to make sure that I never slap them down on a hard surface!