I don’t usually have a habit of taking biscuit men on a promenade to church. But on this particular day I had a rendevous with french history, thanks to this little biscuit fellow. On this type of occasion I throw reason straight out the window and am motivated to do things I ordinarily wouldn’t do.

And yes, I say french history, even though this post is titled ‘Le Suisse’. This elaborately costumed, solemn biscuit bonhomme is deeply ingrained into the culture of the southern french city of Valence but he is fact, a swiss guard. Does this tease the curiosity of anyone?

The character of Le Suisse is the biscuit commemoration of the guards of Pope Pius VI, made by Maison Nivon boulangerie and patisserie of Valence.  Pius VI was the 4th longest serving pope, and his life ended in the city of Valence. A prisoner of Napoleon Bonaparte on behalf of  the 1st French Republic that fought the power of the Catholic Church in France, Pius VI had refused to submit at the proclamation of the Roman Republic in 1798 and was exiled to France. Having first passed by Siena, Florence, Parma, Piacenza, Turin, Briancon, Grenoble, old and in frail health, he died in August 1799 in Valence. Initally buried in the city, his remains were transported to Rome at the beginning of the 19th century. 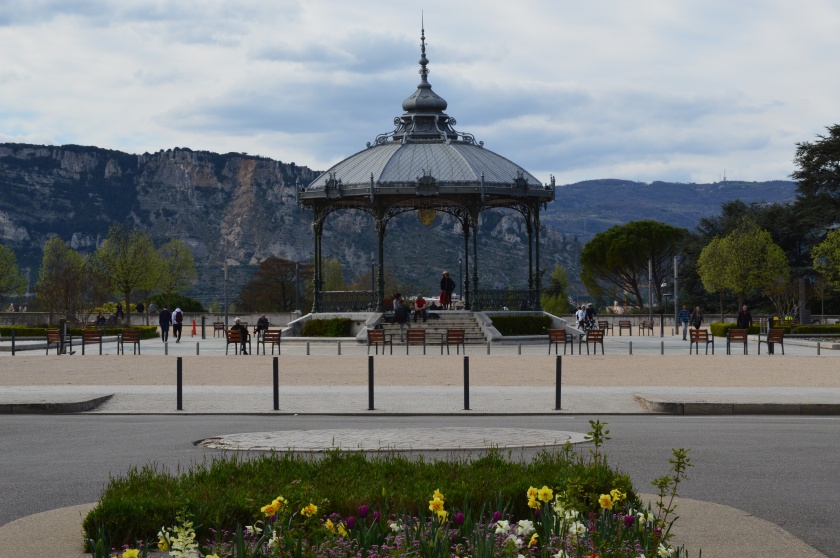 I have been very fortunate to travel through Valence on four occasions recently and the thrill of a stop over at Nivon has me dreaming about their wonderful baked treats for hours along the autoroute beforehand. To visit a bakery that respects the melding together of history and sweet delicacies feels like a particular luxury.

Parking as close to the romantique Kiosque Peynet (1862) as possible, the view of the beautiful bandstand makes my heart light. A sigh at this glimpse of such a beautiful construction always escapes. To stroll along avenue Pierre Semard and spy the Nivon symbol which echos the kiosque again and to push open the biscuit handle formed as Le Suisse himself, I feel my heart positively racing.

Biscuity almost cakey textured Le Suisse are standing to attention on the shelves above fat, pillowy round pognes, their golden crusts so beautifully echoed in the richly hued timber shelving. But stunningly, the magnificent swiss guard costume is echoed in the gold, yellow, deep blue and dark red sublime tiling that adorns not only the floor but also the walls. Sumptuous, I feel treated to a visual feast, just standing inside and admiring all around me, before I have taken a single bite of any baked creations.

Praline studded St Genix brioche, heavenly crusted breads and a selection of pastries with jewel shine finition are also on display. Celophaned Valrhona chocolates on sale speak volumes to confirm again the quality of the establishment.  Framed behind the counter, aloft is a true treasure – a medal adorned certificate from the 1898 Paris Exposition Internationale Universale, a Grande Diplome d’Honneur awarded to Mr Henry Nivon for his pognes! It is just beautiful and so exciting to see. 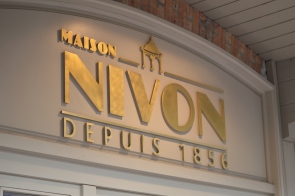 Mr Nivon founded the boulangerie in 1956 and today it is owned by the Maurin family, who took the reigns in 1930 and have been its owners ever since.  Mr Denis Maurin, today’s most passionate, creative and inventive owner has an irrepressable enthusiasm and pride in his product, it’s history and the region. He invents new recipes weekly and I can attest that I am madly and utterly smitten with his brioche creation, Fleur de Nougat. So beautiful is this particular creation, I wish to write about it separately!

One day last week, my daughter and I embarked upon the adventure of making Le Suisse using the recipe of Mr Maurin.  It was a very entertaining experience and we certainly had a lot of fun. With such a quantity of dough, it was an impressive feat to mix and handle! I have to apologise to Mr Maurin for our poorly or oddly formed Le Suisse – he tasted utterly marvelous but his shaping went a little haywire and proved that I have a lot of ground to cover before I can call myself a good baker!  I have decided to show and conserve as a souvenir the first Le Suisse we made – it takes a little courage because he is rather imperfect and appears to have hooves rather than feet, could possibly be wearing flares and may quite be described as armless,  but we enjoy the aspects of this little guard’s face!

My daughter thought the entire process from mixing to baking was hilarious and I will certainly say that if Mr Maurin would like to extend to me the invitation to witness the expert shaping of Le Suisse in his bakery in Valence, I would be delighted to learn on the spot with the masters! Thank you Mr Maurin for continuing to keep this precious piece of Valence history alive in such a creative format and we certainly do hope that your own son will continue on one day to offer the next generation such a delicious history lesson! 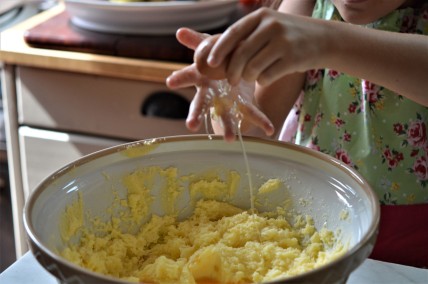 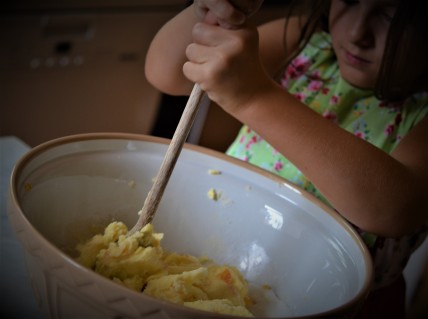 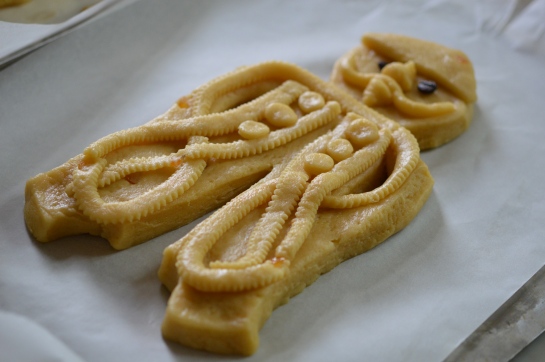 The following is the translation to english of Mr Maurin’s recipe for Le Suisse! 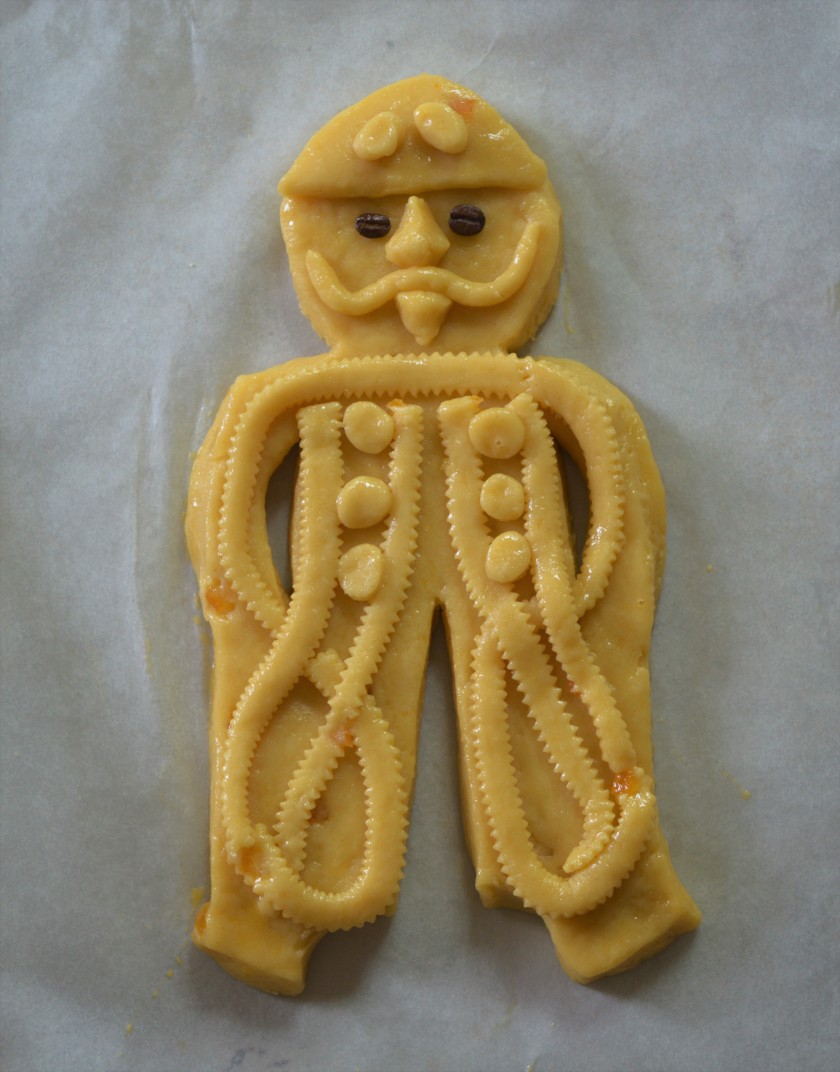 For 5 Suisses of 1kg

In a large bowl (or even better, in a mixer), knead well the butter, sugar, bicarb soda and candied orange. Add the eggs little by little. When the mixture is well creamed, add the flavouring. Finally, incorporate the flour and stop when you obtain a homogenous dough. Wrap this 5kg dough in a tea towel and allow to rest for a good half hour. Separate into pieces of 950g and keep the rest for the decorations.

Give to each piece of dough the form of a spindle that is a little ‘potbellied’. With the help of a rolling pin, flatten starting at the middle and shape to obtain an oval of 3cm thickness. Cut with a small paring knife the following shapes: Place on an oven tray and if possible on baking paper. Decorations: A half circle for the hat, 2 small balls for the nose and chin, a thin cord for the moustache and 2 coffee grains for the eyes, 4 strips for the arms, body and feet and finally 12 buttons. Before cooking, brush twice with beaten egg, to which you have added a spoonful of lukewarm honey. Cook in a hot oven of 240°C and remove as soon as it colours. 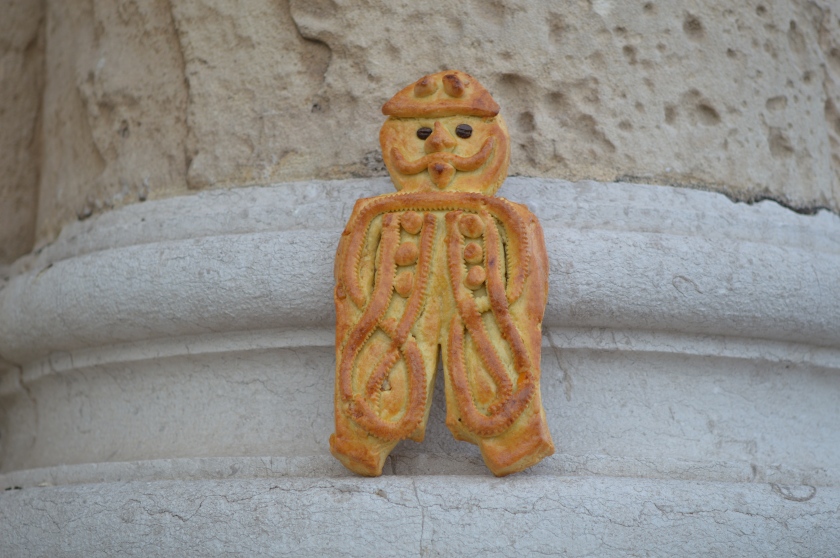 One thought on “Le Suisse of Valence”