Financiers are little gold almond ingots of sweetness that in my eyes are as valuable as any bullion. These small, dense bars of cake evolved from the clever idea of a patissier called Mr Lasne in the 1890s to revive and repackage an old cake recipe, visitandine, invented by an order of nuns of the same name and baked since the 17th century. 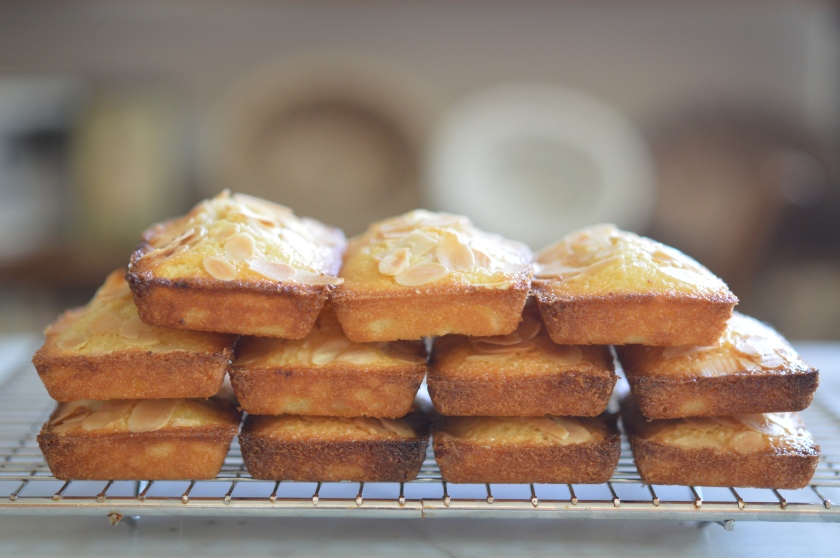 With his patisserie located in the stock exchange district of Paris, Mr Lasne started to bake the visitandine in a rectangular form, like tiny ingots. Stories suggest that the shape change was to make the format more friendly to the financial workers who did not want to dirty their hands too much with the process of eating cake – a rectangle versus the old visitandine shape of round and fluted.

Whilst I am seeing a slight difference in the hand sullying capacity of these two shapes, I am mainly preferring the aspect of the story that suggests the form was to replicate bars of gold. Whilst in the general neighbourhood of the topic, I thought it interesting to mention that the word ‘bullion’ we english speakers use is taken from a french figure in history – Claude de Bullion, superintendant of finances and minister of the state,  who served under french King Louis XIII 1632 – 1640.

I have a particular souvenir of discovering a bakery in the St Germain des Prés area of Paris that made exquisite financiers; wandering the Jardin de Luxembourg with one in my hand, I don’t recollect being worried about butter on my fingers!

So let’s go to bake. I know that these moist, dainty ingots won’t pause for long in your own cake vaults – they are simply divine!

Butter and flour for the moulds

Mix the sugar, flour and almond powder and sift all. Incorporate the egg whites that have been lightly whipped with a fork. In a saucepan, melt the butter over high heat until it foams, without colouring. Add the melted butter to the batter and mix well.

Preheat the oven to 240°C. Butter and flour six traditional financier moulds. Divide the batter between them, sprinkle with flaked almonds and bake for 5 minutes. Lower the temperature to 200°C and continue cooking for 10 minutes. Leave to cool in the moulds.